The Parable of the “actual” Lost son

Luke  15:22-32
“But the father said to his servants, ‘Bring out the best robe and put it on him, and put a ring on his hand and sandals on his feet. And bring the fatted calf here and kill it, and let us eat and be merry; for this my son was dead and is alive again; he was lost and is found.’ And they began to be merry. 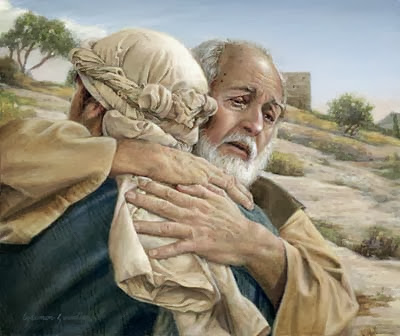 “Now his older son was in the field. And as he came and drew near to the house, he heard music and dancing. So he called one of the servants and asked what these things meant. And he said to him, ‘Your brother has come, and because he has received him safe and sound, your father has killed the fatted calf.’
“But he was angry and would not go in. Therefore his father came out and pleaded with him. So he answered and said to his father, ‘Lo, these many years I have been serving you; I never transgressed your commandment at any time; and yet you never gave me a young goat, that I might make merry with my friends.  But as soon as this son of yours came, who has devoured your livelihood with harlots, you killed the fatted calf for him.’ “And he said to him, ‘Son, you are always with me, and all that I have is yours.  It was right that we should make merry and be glad, for your brother was dead and is alive again, and was lost and is found.’”

We have read, studied and quoted the parable of the lost son in many different angles. I am sure just like many, you would have applied your situations of the lost son, marveled at mercy and grace of the loving father. May be, you also read about the love of the waiting father. His faith and prayers just like one of the post by Sis.Yamini.

Here is another angle of this parable to ponder. This angle would also name the parable as “Parable of the Lost Son” except the lost son is the not the one who returned but about the son who lived with the father in the same house.

Though the focus of the parable is on the youngest son, the ending note of the parable leaves the reader of the Bible or the listener with questions on the older son.

Let us see the character of Older son:
1.    He was obedient unlike the youngest son

2.    He did not squander the wealth in evil ways

3.    He did not ask his share of wealth when his brother got his portions from the father.

4.    He worked hard in the father’s fields from dawn to dusk.

5.    He kept the father’s respect of the house

However, Luke 15:25 reflects something more about
1.    He was not paying attention or not sensitive to the Father’s grief over his youngest son.

2.    Or Even if he had noticed, he did not partake in his Father’s grief or try to console/comfort his father in grief.

We knew this because; he was stunned by the feast given by his Father to his youngest. This speaks his heart.
·       His heart is unforgiving. He lists the sins of the younger son.

·       He expects his father should not do things without his consent.

·       His heart is filled with anger for his Father. So he inquires about the celebration to a servant and not to his father.

·       He decides not to attend the festivity which is humiliating of his father in front of the guests.

·       He could have expressed his anger in private, but he stands outside to register his contempt known to the people around and also to his brother.

·       When his father talks to him he does not address him “Father”. He goes into the discussion directly, which shows his disrespectful.

Yet, what do you see as the response of the father
1.    He comes out of the feast to convince the older son. Leaving the feast would have got the gathered guest’s attention. Yet, the father does that for he wants his older son to be part of the celebration

4.    He explains the privilege and rights that the Older son already possess. The father reminds of the older son’s inheritance.

5.    The passage clearly tells that the Father is deeply hurt by the older son’s action.

Just like that there are so many lost sheeps reaching pen. There are so many lost souls getting saved and brought back to the LORD’s fort. But his Israel, the holy nation, the body of Christ had not inherited the heart of the father in tending and rearing the “found” sheeps. We are like Pharisees or the people of the Old Testament with hearts hardened by the laws and our own righteousness. We are in the mansion, yet we rebuke the master of the house by the actions and thoughts. We are close yet so far. We do the father’s work but without understanding the insight of the end result.

In this parable, you will realize that being the younger son is much better than the older son.

Matthew 20:14 -16
Take what is yours and go your way. I wish to give to this last man the same as to you. Is it not lawful for me to do what I wish with my own things? Or is your eye evil because I am good?’  So the last will be first, and the first last. For many are called, but few chosen.

It is a warning parable to us to always gauge ourselves as we grow in the faith. It is not just the Al Mighty’s grace and power we inherit. We should constantly challenge ourselves to imitate the heart of the father to extend the same grace and mercy to others. That is the true inheritance!
Posted by Dii at 10:22 AM