Of all the things in the world, of all the places of sorrow, grief, pain and suffering…Why the wedding for the Son of GOD's first miracle? Have you wondered? 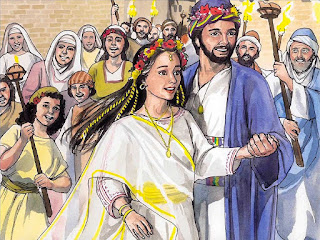 Why Jesus chose a wedding occasion to demonstrate HIS power bestowed upon him. Was he a party lover? Of all the miracles, changing water to wine!!! Was it the most important? 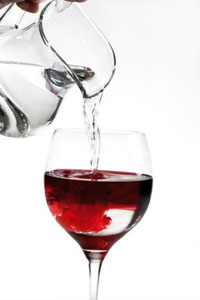 John 2:1-11
2 On the third day a wedding took place at Cana in Galilee. Jesus’ mother was there, 2 and Jesus and his disciples had also been invited to the wedding. 3 When the wine was gone, Jesus’ mother said to him, “They have no more wine.”
4 “Woman,[a] why do you involve me?” Jesus replied. “My hour has not yet come.”
5 His mother said to the servants, “Do whatever he tells you.”
6 Nearby stood six stone water jars, the kind used by the Jews for ceremonial washing, each holding from twenty to thirty gallons.[b]
7 Jesus said to the servants, “Fill the jars with water”; so they filled them to the brim.
8 Then he told them, “Now draw some out and take it to the master of the banquet.”
They did so, 9 and the master of the banquet tasted the water that had been turned into wine. He did not realize where it had come from, though the servants who had drawn the water knew. Then he called the bridegroom aside 10 and said, “Everyone brings out the choice wine first and then the cheaper wine after the guests have had too much to drink; but you have saved the best till now.”
11 What Jesus did here in Cana of Galilee was the first of the signs through which he revealed his glory; and his disciples believed in him."

I had pondered and dismissed the thought coz I cant just comprehend why would the Son of GOD would pick a not so significant place or an event.

After 15 yrs of my marriage and some what close walk with GOD, Holy spirt revealed that this dimension is not an insignificant event rather a mighty place of power and order. Let me go step by step.

GOD brought Adam and Eve together. They become the flesh of the flesh and blood of the blood which means they are married in the eyes of the LORD.
Satan, the fallen angel who had some wisdom of GOD decided to bring division in this relationship coz he know of all the relationships that will come into existence in this world, the relationship between a husband and wife is the most holy and the only relationship that will Mimic relationship with GOD. He conspired to mar it. He decided to take his first step towards it and by confusing Eve.

He convinced Eve that she is better than her husband Adam. He made her feel important. He made her the decision maker. He tries to empower her by false hope.

Yes, Do you think Adam wouldn't have brought fruit eating incident with Eve during hard years of his toil? On those days, he would come home tired and he would have at least mumbled in frustration and blamed Eve for the downfall. Agree?

As for Eve, imagine the only human she knows is upset with her and as she suffers from Child birth (after 2000 yrs epidural will be found) Imagine her heart wrenched with pain of guilt and would one day blow up with disrespectful words of accusation like “What were you thinking? Where were your senses?”. (Sorry, if it sounds so much like your marriage. Don’t be upset. That’s Satan's whole idea from the beginning.)

There you go, Satan attained his first victory (temporary) by bringing Sorrow to GOD’s most precious creations.

GOD has to restore this marriage back in order. Turn almost empty vessels with Wine of great taste and flavor. Turn colorless and tasteless water to A drink of joy and merriment. HE wants the relationship to be restored for the Humans to model that relationship with HIM.
Anybody who does not respect or love his/her *spouse would not be able to completely show the reverence and love to GOD. Dont you agree?

To Be Continued..........
*Disclaimer: We are not by any chance talking here about abusive spouses. We are talking about 2 normal human beings brought together in marriage and love
Posted by Dii at 11:49 AM