Book of Luke offers parables with an incredible wealth of truth about salvation and LORD’s varied responses.

The Parable of the Lost Sheep
Luke 15 (NIV)
3 Then Jesus told them this parable: 4 “Suppose one of you has a hundred sheep and loses one of them. Doesn’t he leave the ninety-nine in the open country and go after the lost sheep until he finds it? 5 And when he finds it, he joyfully puts it on his shoulders 6 and goes home. Then he calls his friends and neighbors together and says, ‘Rejoice with me; I have found my lost sheep.’ 7 I tell you that in the same way there will be more rejoicing in heaven over one sinner who repents than over ninety-nine righteous persons who do not need to repent. 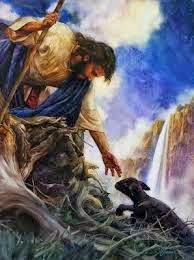 The Parable of the Lost Coin

8 “Or suppose a woman has ten silver coins[a] and loses one. Doesn’t she light a lamp, sweep the house and search carefully until she finds it? 9 And when she finds it, she calls her friends and neighbors together and says, ‘Rejoice with me; I have found my lost coin.’ 10 In the same way, I tell you, there is rejoicing in the presence of the angels of God over one sinner who repents.” 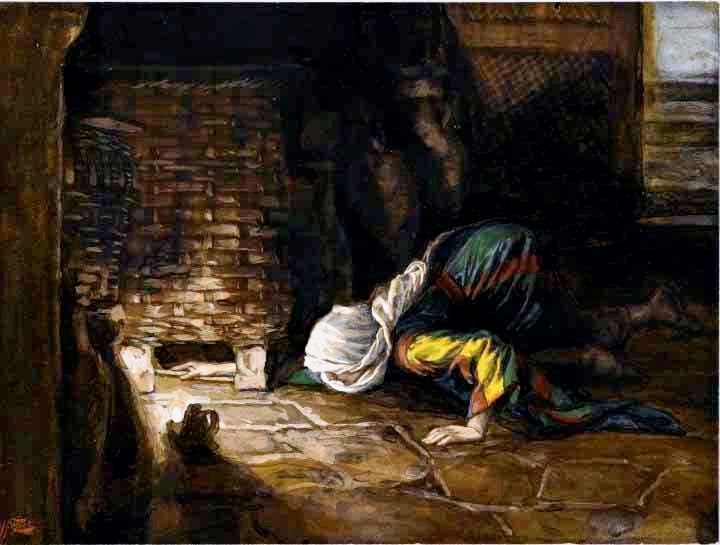 Points to note:
·         A Silver coin. So valuable. It helps to live this earthly life. Yet if invested right can produce more such Silver coins of its value or coins more valuable than the invested Silver coin itself. Silver Coin plays a role in both believers and non-believers life.
·         One out of 10 Silver coins is lost. Stats: 10% loss.
·         It is managed by a woman/man with a keen attention.

The Parable of the Lost Son

11 Jesus continued: “There was a man who had two sons. 12 The younger one said to his father, ‘Father, give me my share of the estate.’ So he divided his property between them. 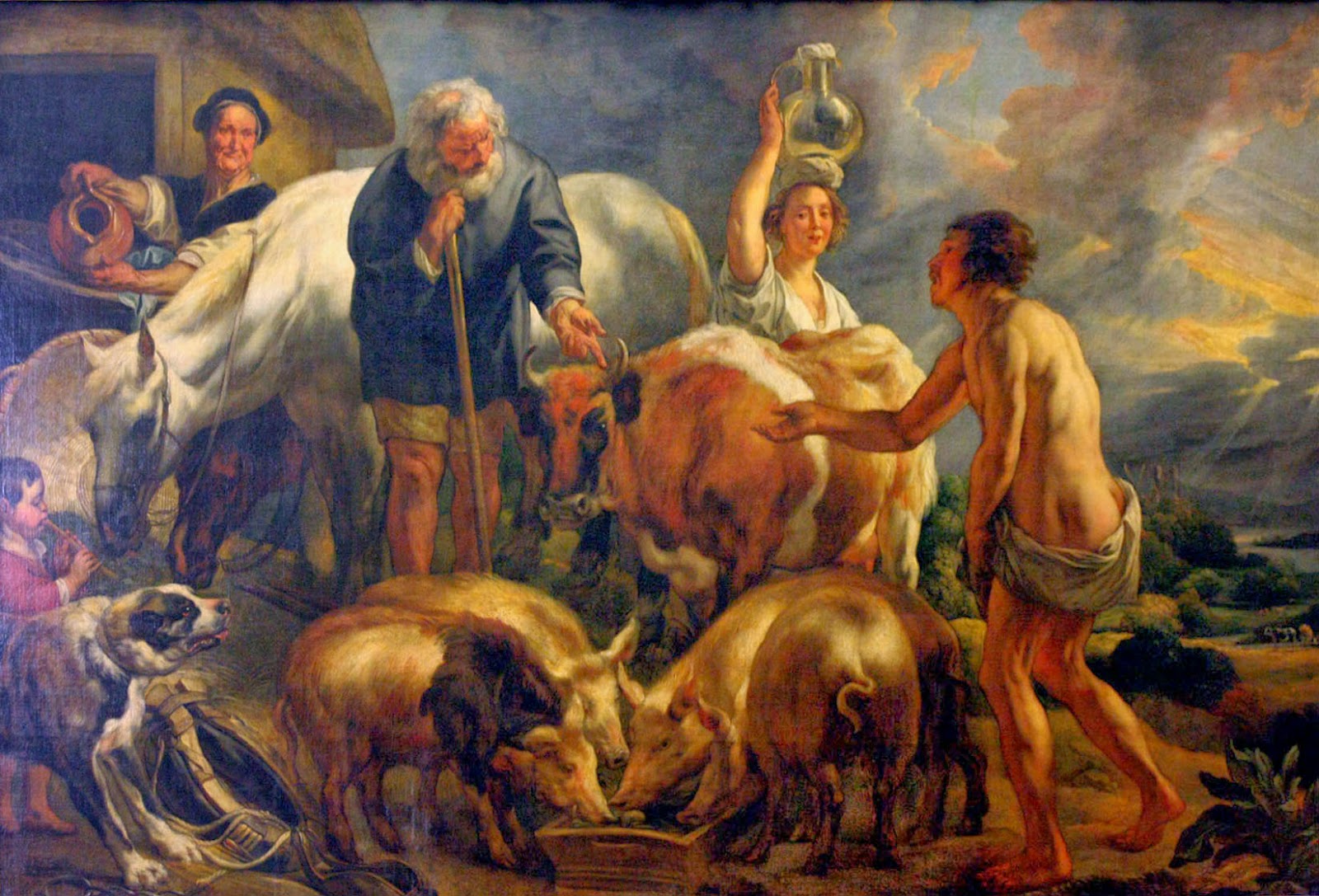 13 “Not long after that, the younger son got together all he had, set off for a distant country and there squandered his wealth in wild living. 14 After he had spent everything, there was a severe famine in that whole country, and he began to be in need. 15 So he went and hired himself out to a citizen of that country, who sent him to his fields to feed pigs. 16 He longed to fill his stomach with the pods that the pigs were eating, but no one gave him anything. 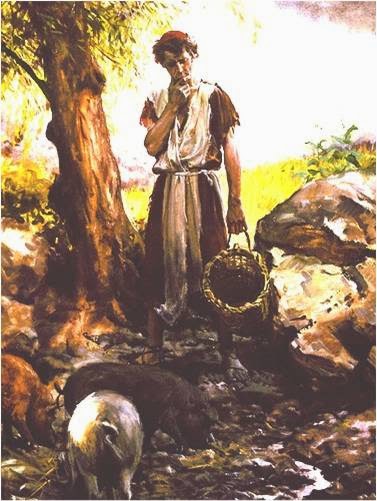 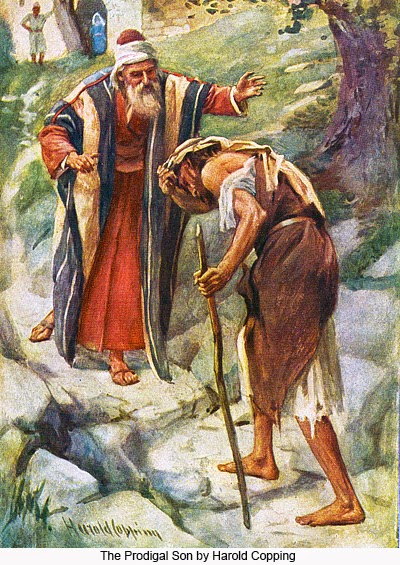 See the response of the LORD in each instance.
1.       Shepherd goes in search of that lost sheep and bring him back in his shoulder
2.       Woman lights up the lamp and searches without waiting for dawn to break up. She wants to make sure she finds this coin before she goes to bed. This is her priority and first order of business.
3.       A Father who waits patiently.
Our LORD’s thought are not same as ours. He works in mysterious ways when it comes to saving (salvation).

At least we can find 3 kinds of work here:
When there is a soul lost in ignorance, lost in its brilliance, in its own understanding. The Shepherd sets out for a journey in search of that drifted away sheep. The sheep is so worried and confused to follow the lead. Sheep lacks comprehension. So the Shepherd carries the sheep. Young Sheep must be at 25 pounds. But the Shepherd happily lifts him and carries home on the shoulder.

Then there is this Valuable coin. There are souls who are so talented, so valuable and they are lost. Like the Woman, the LORD lights up and find him. Isn’t he the one who keep sweeping his eyes all over the world in search of the souls. As he sweeps and find that Coin, he puts them in his vault along with the other talented souls.

The last(lost? J ) but not the least, the Son. HIS son. HIS image. HIS Heir. HIS torch. HE gives away what he wants. HE let his rejoice the world. HE let him lose. HE let him suffer. HE waits for his return. For HE knows the plan. HE sees the “action” of son returning home. HE doesn’t listen to what son has to say. HE is fine with HIS son’s action of coming back. That’s what matters to him. HE orders HIS servants/angel to “quickly’ change his son’s situation, because that is HIS son. Yes, there are certainly people who he view as HIS Sons/daughters. HIS response to their loss is different. 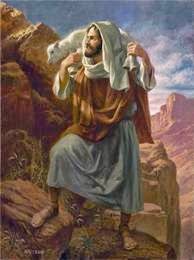 Every soul is so special, so unique and so different. LORD’s approach to their salvation is that unique and special as well. You could have been drifted away sheep, a lost coin and a son in a far away land. Take heart, all is well with our LORD Christ Jesus who is our savior, redeemer and advocate!

What a GREAT LORD we serve! A Caring Shepherd, A Perseverant Woman, A Compassionate Father!